I've always been quite curious about Spanish history.  As a history major, I learned a lot about British history but other countries - not so much.  So when I heard about Lynn Cullen's novel about Juana of Castile (sometimes named Joanna or Juana de loca - the mad) I was intrigued.  She was the daughter of Isabel and Ferdinand...sound familiar?  They were THE Isabel and Ferdinand who helped  Christopher Columbus get to America - well he always thought it was China and India.  I found this to be a beautiful and fascinating novel.


They synopsis:
Juana of Castile, third child of the Spanish monarchs Isabel and Fernando, grows up with no hope of inheriting her parents’ crowns, but as a princess knows her duty: to further her family’s ambitions through marriage. Yet stories of courtly love, and of her parents’ own legendary romance, surround her. When she weds the Duke of Burgundy, a young man so beautiful that he is known as Philippe the Handsome, she dares to hope that she might have both love and crowns. He is caring, charming, and attracted to her-seemingly a perfect husband.
But what begins like a fairy tale ends quite differently.

When Queen Isabel dies, the crowns of Spain unexpectedly pass down to Juana, leaving her husband and her father hungering for the throne. Rumors fly that the young Queen has gone mad, driven insane by possessiveness. Who is to be believed? The King, beloved by his subjects? Or the Queen, unseen and unknown by her people?

One of the greatest cautionary tales in Spanish history comes to life as Lynn Cullen explores the controversial reign of Juana of Castile-also known as Juana the Mad. Sweeping, page-turning, and wholly entertaining, Reign of Madness is historical fiction at its richly satisfying best.

What an amazingly interesting story about Juana's life.  As usual, I always have to see what these characters really looked like.  Here's the most famous image of Juana:

I think her upbringing was amazing.  Unlike Marie Antoinette (I can't help comparing because I just read her story), Juana was superbly educated and extremely smart (check her wiki page).  Early in the book she is witness to Christopher Columbus (Cristóbal Colón in Spanish) as he presents his early finds from what will be the Americas - Native Americans or Indios, gold, food, and animals.  Juana also meets Colon's son - Diego who will be her friend and more in the following years.  Here's Diego:
But of course, Juana must marry for her family and country so she gets bundled off to the cold and dreary Flemish countryside to marry Philip the Handsome.  Ok.  So I am pretty disappointed in Philip the Handsome's photo.  Serious?  Was this considered "handsome" in the day?
He looks like what his character really was - a petulant boy who always gets what he wants.  Much to Lynn Cullen's credit, I really felt for all the characters - especially Philip the Handsome.  I feel like there was a lot of mis-trust and lack of respect on Juana's part - which in part helped turn Philip into a cruel husband.  Still, until almost the end, Philip remained almost likeable, if not spoiled.

Juana was an amazingly beautiful and educated person, but she was often too trusting.  I loved Lynn Cullen's portrayal of her relationship with her mother, Isabel. Very early in the book, Juana learns of her father's infidelity which pretty much taints her future relationship with her mother, father, and her husband.  She's also influenced by how strong of a woman and ruler her mother is - and how that's affected her mother and father's marriage.  Here's Isabel (how gorgeous is she?):


I loved the side characters - her main lady in waiting is Beatriz, who is this amazingly brilliant woman who is more interested in education than getting married.  Interestingly enough, Isabel's sister - Catalina - becomes very famous herself as Henry VIII's first wife, Catherine.  Here's a young Catherine:

I adored the relationship between Juana and Diego.  I love when historical fiction takes something that is very plausible and works it all out.  I was fascinated with how Juana becomes known as "loco" and you'll just have to read the book to see why that is.  This was a wonderfully written tale of Juana de Castile.  I'll never be able to call her Juana de loca again.  If you like historical fiction, forget the Tudors and check out Reign of Madness.


Lynn Cullen also wrote a previous book I'm really interested in reading.  It's called The Creation of Eve and is about the historical character Sofonisba Anguissola, a woman artist working with Michelangelo. 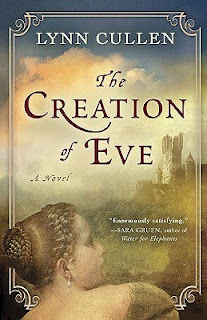