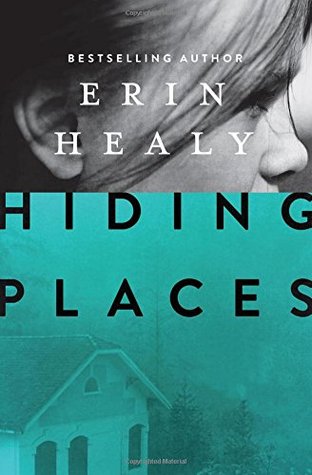 
I love when I receive review books that I wouldn't normally have picked up and I end up really enjoying them. I tend to gravitate towards historical fiction, even in my suspense or mystery category. But Erin Healy's Hiding Places reminded me to branch out more often. I was also excited that Erin Healy lives in Colorado, which is where I am from, and the story takes place there. Yay!

Eleven-year old Kate keeps her knowledge to herself - one sister's stash of marijuana, the other's petty cash pilfering, her grandfather's contraband candy bars. She protects her mother and Gran, too, screening out critical comments from the hotel suggestions box. But suddenly the stakes are raised; her grandfather's best friend is murdered the day after Kate heard the two men arguing.

At the same time, far from the quiet mountain resort, a homeless man flees a robbery gone wrong...a gang member seeks revenge for the death of his son...and a boy chooses the worst time to wield spray paint on a store window. In a strange and spiraling sequence of events, their disparate worlds collide at Harrison Lodge.

Kate offers shelter to one of them, unaware of the terrible consequences to the family she loves. But people can hide in all kinds of ways, sometimes even in plain sight...and some secrets are just waiting to be exposed.

I've probably mentioned this before, but I love when an author shows events unfold through a child's point of view and it actually works and sounds authentic.  I loved the character of Kate. You can tell that she's very smart, self-aware, and able to take care of herself. She's trying to make sense of it all without seeing things through adult eyes but also not completely naive.

Erin Healy also shows the points of view of a couple other characters, including Charlie a young adult who left an abusive home situation and has been homeless for a few years. And then there's the Fox, a man who's torn between life as a gang member and his role as a caring father who is trying to keep his son from following the same path. He was such an interesting character because while he made a lot of bad decisions, he was such a sympathetic character. Well done! Then there's Pearl who is Kate's great-grandmother and who is kind of used to pretending to be crazy and staying out of the way. I liked that she has this awakening of realization that she needs to be more involved in her life and her family.

Hiding Places is technically a Christian fiction book but there really isn't a big Christian theme that I could notice.  I do like that it shows real world people who aren't "bad" or "good" but just living life as it is dealt...making good decisions and bad but once you get into their heads and stories, while you might not agree, there is an understanding. People don't often get up one day and think to themselves, this is the day I'm going to mess up my life.  Often, events and things just spiral out of control.  But then you see people who could make the easy decision and way out but decide to do the right thing and it's amazing.

Again, I liked that the whole story took place in Colorado - Denver and a fictional mountain lodge. I mean we all know that the underbelly of the world exists but to read about it in a familiar setting just makes it hit home a little bit more.

I haven't read anything else by Erin Healy but I will be checking her books out in the future.