Title: A Game of Thrones (A Song of Ice and Fire: Book one)
Author: George R. R. Martin
Paperback: 807 pages
Publisher: Bantam Books
Published date: 1996/2011
FTC: given as a gift from a friend


Years and years ago one of my friends kept telling me I should read this book from the series A Song of Ice and Fire.  While not sci-fi/fantasy fantatics, I remember reading Le Guin's The Left Hand of Darkness with her for a high school lit class and we both loved it.  A few years later I was more into Robert Jordan's Wheel of Time series because of my dad, so I kind of forgot about her recommendation. Silly me.  I'm writing here and now that I should have listened to her.

Fast forward to a few months ago and a couple of my other friends decided we should all read A Game of Thrones, see if we liked it, and watch the show.  We devoured the book.  I can not wait to read the whole series.  The show is amazing too.

The back of the book:

In a land where summers can last decades and winters a lifetime, trouble is brewing. The cold is returning, and in the frozen wastes to the North of Winterfell, sinister and supernatural forces are massing beyond the kingdom's protective Wall. At the center of the conflict lie the Starks of Winterfell, a family as harsh and unyielding as the land they were born to. Sweeping from a land of brutal cold to a distant summertime kingdom of epicurean plenty, here is a tale of lords and ladies, soldiers and sorcerers, assassins and bastards, who come together in a time of grim omens. Amid plots and counterplots, tragedy and betrayal, victory and terror, the fate of the Starks, their allies, and their enemies hangs perilously in the balance, as each endeavors to win that deadliest of conflicts: the game of thrones.

It's not an in-your-face fantasy book -- it read a lot more like historical fiction but with direwolves, whitewalker zombie things, and extinct dragons.  A warning: there is a lot of violence, death, and the kids in the book are a lot younger than they are portrayed as in the HBO show.

Still not convinced that you might enjoy this book?  Well, one of the friends I was reading it with absolutely devoured it and is hooked.  While perusing books, she is more drawn to beach reads and Nicholas Sparks books.  And SHE loved it.

I found it interesting to hear her thoughts as she read it.  I'm used to chunky fantasy books so I was used to the jumps in perspective - each chapter is told by a different character which gives you a broader spectrum in the story and time flies by a lot faster.  I knew to look to the back of the book first to see the character list - so so helpful.  There are a lot of characters as the story takes place on an island (think Great Britain) and each area is ruled by a House with a Lord/Lady and the whole kingdom is ruled by one king.  So looking to the back of the book to get some characters straight is a must.

I also love being able to compare the book to the show. We waited until we finished the book to start watching the first season, but I already had Sean Bean in mind as Lord Stark.  Beautiful casting.  One thing to note with the show: I can't imagine watching it and not reading the books. I'd be lost on a lot of things had I not read the book.

Have you read the books, watched the show, or steered clear of it all?  Why or why not?

A Game of Thrones Muppets!
Posted by Amanda at 1:30 PM No comments: 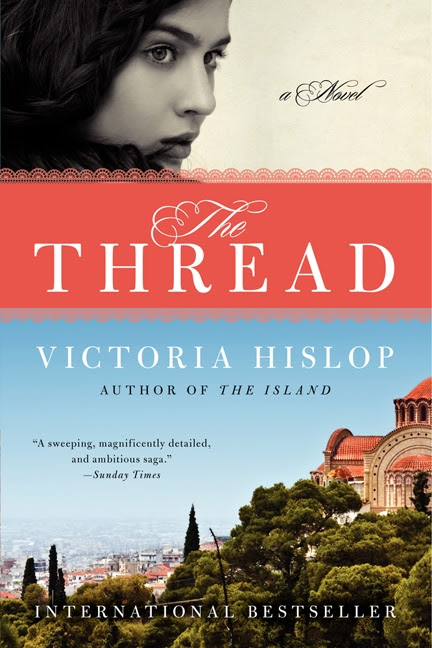 
When I heard TLC Book Tours was promoting Victoria Hislop's new book The Thread, I was excited to be able to join in.  A few years ago I had read and reviewed her novel The Return and really enjoyed the history and story. I've been meaning to read her first book The Island which I've heard is pretty amazing too.  I LOVED The Thread. I am now an official Victoria Hislop fan.  This is exactly how I love my historical fiction.

Thessaloniki, Greece, 1917: As Dimitri Komninos is born, a fire sweeps through the thriving multicultural city where Christians, Jews, and Muslims live side by side. It is the first of many catastrophic events that will forever change this place and its people. Five years later, as the Turkish army pushes west through Asia Minor, young Katerina loses her mother in the crowd of refugees clambering for boats to Greece. Landing in Thessaloniki’s harbor, she is at the mercy of strangers in an unknown city. For the next eighty years, the lives of Dimitri and Katerina will be entwined with each other and—through Nazi occupation, civil war, persecution, and economic collapse—with the story of their homeland.


Thessaloniki, Greece, 2007: A young Anglo-Greek hears his grandparents’ remarkable story for the first time and understands he has a decision to make. For decades, Dimitri and Katerina have looked after the treasures of those who have been forced from their beloved city. Should he become their new custodian? Should he stay or should he go?


I love historical fiction that sweeps me through the generations and makes me learn all about a country and city that I don't have much knowledge of.  The story starts out with Dimitri and Katerina Komninos telling their college-age grandson their history and why they won't ever leave Thessaloniki.  Then I was swept right into the city of Thessaloniki.  It's 1917 and WWI is raging across the continents.  Thessaloniki literally catches on fire and burns.  A few years later and across the Aegean Sea, the city of Smyrna is caught in the chaos and is burning too. Because of war, the Greeks are being expelled from Asia Minor and Muslims are being expelled from Greece.  Katerina is from Smyrna and loses her mother in the crowd.

From those gripping first scenes I was hooked.  It's Dimitri and Katerina's story and I fell in love with them both, but it's also the story of everyone living around them - family, friends, and Thessaloniki.  If you want a quick love story then this is not the book for you. Katerina is just about to turn the corner of adulthood, become an acclaimed embroiderer (get it, The Thread?) and just reacquaint herself with her childhood friend at about page 150.  But this is what I love about this book - it's more about the city of Thessaloniki itself as the characters live through the city's epic moments durning the 20th century.

If you love historical fiction and armchair traveling, it doesn't get much better than The Thread. Beautiful.