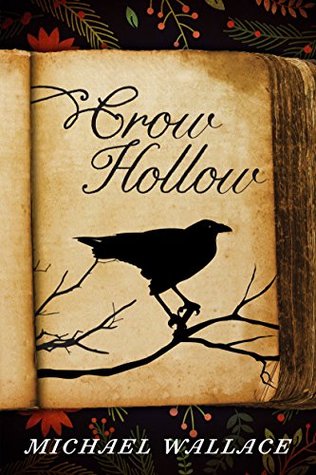 
When I received an email asking if I wanted to review Michael Wallace's novel Crow Hollow, I was intrigued. I normally don't jump onto tours or review unknown authors anymore since with two little ones I just get swamped but I love this time period. One of my favorite movies is The Last of the Mohicans and I love learning about early United States history. Crow Hollow takes place almost a century before The French and Indian War, just after a period in history I wasn't too familiar with - King Philip's War. I love learning new things. Anyway, mix the time period in with an English spy (you got me there) and a young widow trying to find her daughter held captive by native tribes...it's a great read.

In 1676, an unlikely pair—a young Puritan widow and an English spy—journeys across a land where greed and treachery abound.

Prudence Cotton has recently lost her husband and is desperate to find her daughter, captured by the Nipmuk tribe during King Philip’s war. She’s convinced her daughter is alive but cannot track her into the wilderness alone. Help arrives in the form of James Bailey, an agent of the crown sent to Boston to investigate the murder of Prudence’s husband and to covertly cause a disturbance that would give the king just cause to install royal governors. After his partner is murdered, James needs help too. He strikes a deal with Prudence, and together they traverse the forbidding New England landscape looking for clues. What they confront in the wilderness—and what they discover about each other—could forever change their allegiances and alter their destinies.
My thoughts:

I am so glad I decided to review Crow Hollow because it was an excellent read. From the first chapter I was sucked into James Bailey and Prudence Cotton's story.  It alternates between their perspectives and I loved getting into both of their heads. Michael Wallace did a great job of setting the stage and story without overly going into the history or bogging it down with details. That said, the details he did include filled out this past world perfectly. I could completely visualize this time period.

Getting into James and Prudence's story, it was fascinating to see all the politics that went on during this time period. I realized that I didn't know much about the autonomy some of these early colonies had. There was also fairly good friction between countries too, the Dutch in New York and the French not to mention the various Native tribes who's alliance were as individual as tribes. Crow Hollow is really almost a murder mystery with political intrigue and conspiracy thrown in and a touch of romance. It was all really well balanced and flowed incredibly well. I kept thinking this would make a fascinating movie or mini-series.

As for the characters themselves, I thought they were incredibly well written. James Bailey walks that fine line being a womanizing Crown's agent and cad and falls into the fortunately better role of being an honorable hero. Prudence Cotton's character also walks that fine line of being an irritating desperate widow and falls into the better role of being a self-reliant and independent woman. Prudence's back story of being held captive by a Native tribe after watching her town's massacre and then the retribution and massacre of many natives. On top of losing her husband and daughter, I just felt like Prudence's amazing resilience and compassion was awesome to read.

If you like historical fiction this is a great read but regardless of the time period, if you like mystery, intrigue, and conspiracy, Crow Hollow is a great pick.