I had read Matthew Pearl's novel The Last Dickens a few years ago (my review) and really enjoyed Pearl's writing.  I've been meaning to read more of his books because he writes about such interesting topics: Edgar Allan Poe (The Poe Shadow), Dante's Inferno (The Dante Club), and of course Charles Dickens in The Last Dickens.  So when I heard he was coming out with another historical fiction, I knew it would be interesting.  Set in 1868 in Boston, horrible catastrophes are happening around the city and it may be up to MIT's first graduating class to figure out what's going on.  Awesome, right?

Boston, 1868. The Civil War may be over but a new war has begun, one between the past and the present, tradition and technology. On a former marshy wasteland, the daring Massachusetts Institute of Technology is rising, its mission to harness science for the benefit of all and to open the doors of opportunity to everyone of merit. But in Boston Harbor a fiery cataclysm throws commerce into chaos, as ships’ instruments spin inexplicably out of control. Soon after, another mysterious catastrophe devastates the heart of the city. Is it sabotage by scientific means or Nature revolting against man’s attempt to control it?
The shocking disasters cast a pall over M.I.T. and provoke assaults from all sides—rival Harvard, labor unions, and a sensationalistic press. With their first graduation and the very survival of their groundbreaking college now in doubt, a band of the Institute’s best and brightest students secretly come together to save innocent lives and track down the truth, armed with ingenuity and their unique scientific training.
Led by “charity scholar” Marcus Mansfield, a quiet Civil War veteran and one-time machinist struggling to find his footing in rarefied Boston society, the group is rounded out by irrepressible Robert Richards, the bluest of Beacon Hill bluebloods; Edwin Hoyt, class genius; and brilliant freshman Ellen Swallow, the Institute’s lone, ostracized female student. Working against their small secret society, from within and without, are the arrayed forces of a stratified culture determined to resist change at all costs and a dark mastermind bent on the utter destruction of the city.
Studded with suspense and soaked in the rich historical atmosphere for which its author is renowned, The Technologists is a dazzling journey into a dangerous world not so very far from our own, as the America we know today begins to shimmer into being.


I absolutely enjoyed this book.  After reading The Last Dickens, I wanted to read more of Matthew Pearl's novels. I even bought The Poe Shadow.  But after reading The Technologists, I am a full-fledged Pearl fan.  You must check this one out.

The main reason I adore this book is that I fell head over heels in love with the characters: Marcus Mansfield, Bob Richards, Edwin Hoyt and Ellen Swallow --- even Hammie, Professor Rogers, and Frank Brewer.  This book made me root along for Professor Roger's dream of MIT, for the first graduating class of 1868, for the boys and the one brilliant woman.  I was so excited to read the Afterward where Matthew Pearl says which characters were based on actual people and which were amalgamations of real people.  I want to know more about Professor Rogers, Bob Richards and Ellen Swallow who were all actual MIT people.

Then there's the fictional mayhem that is happening in Boston.  The book starts out with a huge shipping catastrophe that reminded me of the recent cruise liner disaster.  When more equally disturbing attacks occur in Boston, the MIT students have to secretly investigate who is behind the disasters and how to stop him.  They have to work in secret because to involve Institute of Technology would be to link the Institute with the disasters.

I had no idea that MIT was that old and how forward thinking Professor Rogers was in setting up an Institute for Technology.  I can see how MIT and Harvard would be huge rivals.  I loved Pearl's inclusion of student rivalry between the two and the danger of Harvard having MIT closed or incorporated into Harvard.  This book definitely makes me a fan of MIT.

Ok, enough gushing.  I am now listening to The Poe Shadow as an audio book and am loving it so far as well.

Head over to Matthew Pearl's Facebook page because he's got the The Great Leap Week Giveaway going on right now.  If you have The Technologists, snap a picture and post -- even better if you have ALL his novels.  No purchase necessary -- go to the library if you need to! 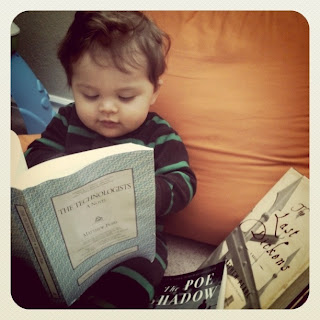 Also check out Matthew Pearl's website.  He's got pictures of some of the real characters like Bob Richards and Ellen Swallow.  I also NEED to download the prequel The Professor's Assassin.  You can do that there too.