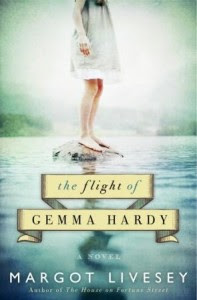 
The Flight of Gemma Hardy is already going down as one of my favorite books of this year -- or any year.  It's just a beautiful book and is a prime example of why I love reading. You know the feeling when you were young and you got swept away by the stories of say Anne of Green Gables, Pippi Longstocking, or Cinderella?  This is exactly the feeling I had even more recently when a few years ago I first read Jane Eyre.  And you wish you could go back and read those books for the first time?  Well sit down, grab a cup of coffee or tea, and cuddle up with this book.

When her widower father drowns at sea, Gemma Hardy is taken from her native Iceland to Scotland to live with her kind uncle and his family. But the death of her doting guardian leaves Gemma under the care of her resentful aunt, and it soon becomes clear that she is nothing more than an unwelcome guest at Yew House. When she receives a scholarship to a private school, ten-year-old Gemma believes she’s found the perfect solution and eagerly sets out again to a new home. However, at Claypoole she finds herself treated as an unpaid servant.

To Gemma’s delight, the school goes bankrupt, and she takes a job as an au pair on the Orkney Islands. The remote Blackbird Hall belongs to Mr. Sinclair, a London businessman; his eight-year-old niece is Gemma’s charge. Even before their first meeting, Gemma is, like everyone on the island, intrigued by Mr. Sinclair. Rich (by Gemma’s standards), single, flying in from London when he pleases, Hugh Sinclair fills the house with life. An unlikely couple, the two are drawn to each other, but Gemma’s biggest trial is about to begin: a journey of passion and betrayal, redemption and discovery, that will lead her to a life of which she’s never dreamed.

The Flight of Gemma Hardy—a captivating homage to Charlotte Brontë’s Jane Eyre—is a sweeping saga that resurrects the timeless themes of the original but is destined to become a classic all its own.

In the Author's Words:

"I made my heroine a little older than myself because I wanted her to come of age just slightly before the rising tide of feminism—the pill, equal pay, discrimination—broke over both Britain and the States. The Flight of Gemma Hardy is, in my mind, neither my autobiography nor a retelling of Jane Eyre. Rather I am writing back to Charlotte Brontë, recasting Jane's journey to fit my own courageous heroine and the possibilities of her time and place. And like Brontë I am, of course, stealing from my own life."

Margot Livesey wrote a beautiful letter to the reader at the front of the copy I have.  I found the above excerpt again on her website.  I thought that was a beautiful tribute for this homage to Jane Eyre.

I straight up loved this book.  Gemma Hardy's spans the late 1950's to the mid 1960's which I thought was such a perfect time period to set her more modern story.  Her upbringing in Scotland, her au pair position in the Orkneys and her background in Iceland -- talk about armchair traveling.   I now just want to pack up and head out and visit all the places from Gemma's story.

Gemma, like Jane Eyre, is such a compelling character.  As a girl who loves reading and who's biggest dream is to go to college, I just fell for her plight and her loneliness.  The title of the book is perfect.  Do you remember when Jane Eyre flees from Rochester?  Just like I wanted to reach into the book and slap Jane Eyre and tell her to talk to Rochester - I wanted to reach in and slap Gemma.  But at the same time I understand.  They both were characters who had to go into their positions with Rochester and for Gemma, Mr. Sinclair, as equals.

I was also beyond excited to realize that I recognized Margot Livesey's name because I have another one of her books on my shelf - The House on Fortune Street.  So I'm going to gobble that one up as well.