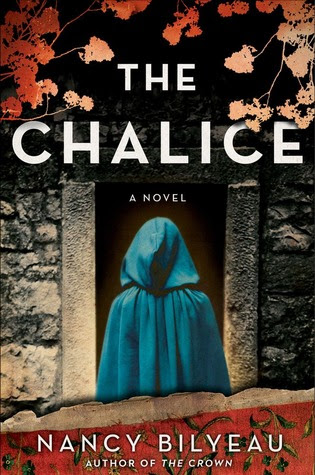 
Remember how I recently raved about Nancy Bilyeau's first novel The Crown?  I was so excited when TLC Book Tours asked if I wanted to be on tour for her second in the series novel, The Chalice.  I am so addicted to this series.  I heard from TLC Book Tours that book #3 The Covenant is going to be out at the end of 2014.  Arg!  I have to wait so long!  If you haven't read this series yet, seriously what are you waiting for?  Good news! Tomorrow I'll be hosting a giveaway for the paperback version of The Crown so one lucky person will be able to get as addicted to this series as I am.

'The Chalice' is a historical thriller told from the point of view of a young woman caught in the crosswinds of time: She has pledged to become a Dominican nun in an England ruled by Henry VIII, who has ruthlessly smashed his country's allegiance to Rome. By 1538, the bloody power struggles between crown and cross threaten to tear the country apart. Joanna Stafford has seen what lies inside the king’s torture rooms and risks imprisonment again, when she is caught up in a shadowy international plot targeting the King. As the power plays turn vicious, Joanna understands she may have to assume her role in a prophecy foretold by three different seers, each more omniscient than the last. The life of Henry VIII as well as the future of Christendom are in her hands—hands that must someday hold the chalice that lays at the center of these deadly prophecies. As she struggles to forge a life for herself in a country that rejects her faith, she must also decide if her future should be shared with a man--and if so, which of the two men who love her should be chosen.

First of all, The Chalice is book #2 in a series starting with The Crown.  Do you have to read The Crown to enjoy The Chalice?  I've read quite a few reviews where the reviewer raved about The Chalice without having read the first book.  I also noticed that Ms Bilyeau did a pretty darn good job about explaining a bit of the back story in a way that would catch you up pretty well if you haven't read any of her books without being tedious if you have.  But The Crown is seriously awesome so just go read it first. It won't take you long.

The Chalice starts out with Joanna Stafford and her fellow nuns and monks left in the aftermath of Henry VIII and Cromwell's closure of her abbey and other monasteries.  Again, Joanna gets caught up in the political intrigues of protecting her faith against Henry VIII's destruction.  She is also torn between her love and admiration of two men in her life: fellow monk and brother Edmund Sommerville and Constable Geoffrey Scovill.  This part is done really well without you feeling like your reading a romance novel, feeling that it's not historically realistic, or feeling like the love triangle is overdone.

I gave The Crown five stars on GoodReads but only four stars for The Chalice.  The only reasons is because like second books I'm kind of stuck in that limbo of "what happens next??!!"  That and Joanna Stafford kind of disappointed me -- just a tad.  In The Crown she is such a strong and noble character while in The Chalice she makes a few mistakes that just make you want to yell at her a bit.  But I loved that she acknowledges those mistakes and definitely has to atone for them.  So while I wanted to shake her, I love that she became a bit more human, a bit less nun perfect.

Do you also remember how in my review of The Crown, I thought that I knew the reasoning behind Ms Bilyeau's titles?  I was totally wrong.  I loved that I was surprised.  The Chalice was not in reference to what I thought it was going to be.  So I am so excited to see where Ms Bilyeau takes Joanna in book #3.  We got a brief glimpse of Henry VIII towards the end of the book so I wonder if he and his court will be more prominent in the last book.  I also love Joanna's connection to Mary Tudor.  I think that in history Mary is a bit maligned since the adoration usually always goes to her half sister Elizabeth.

Here's the book trailer for The Chalice: