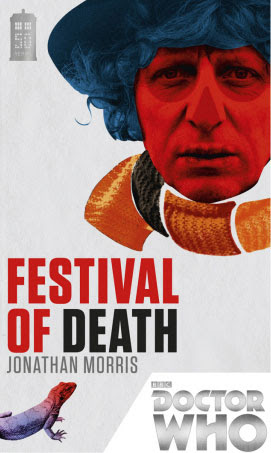 
I am so excited to be part of the Doctor Who 50th Anniversary Collection tour for TLC Book Tours.  In honor of the anniversary, Ebury Publishing is releasing a book for every Doctor from the series -- so if you know your Doctors that means eleven books.

When asked which Doctor's book I'd like to read, my first response was of course, the Fourth Doctor - played by Tom Baker.  You have to understand that I was born in the early eighties and some of my early memories was of watching Doctor Who with my dad -- and while I remember other Doctors there was really only ever ONE Doctor.  I was so excited to get to read this book that I immediately texted my brother that I was on this tour and he responded back "Tom freakin' Baker?!?!"  O yeah.

If you do watch the new Doctor Who series but have never seen the old shows you may not know who I am referring to.  The Fourth Doctor was such a character, always in his trademark scarf, floppy hat, and munching on jelly babies.
I'll admit I was a bit intimidated to try and read a Fourth Doctor book.  I mean, I haven't watch the old show in ages -- but it's on Netflix so I might have to do that.  Would I get the story? The inside jokes?  Have no fear, the book is awesome.

The Beautiful Death is the ultimate theme-park ride: a sightseeing tour of the afterlife. But something has gone wrong, and when the Fourth Doctor arrives in the aftermath of the disaster, he is congratulated for saving the population from destruction -- something he hasn't actually done yet. He has no choice but to travel back in time and discover how he became a hero.

And then he finds out. He did it by sacrificing his life.

Seriously so much fun.  I wanted to find a bag of jelly babies so I could curl up and immerse myself in the fun story. If you aren't familiar with the series, the Doctor is so funny. He's just got this laid back humor, even when everything is chaotic around him.  Back during this period of the series, the Doctor isn't the only Time Lord left and his companion is Romana, another Time Lord.  And of course K9.  O yeah.  Who could forget K9?  The most awesome Doctor companion ever (sorry Rose and Amy.) 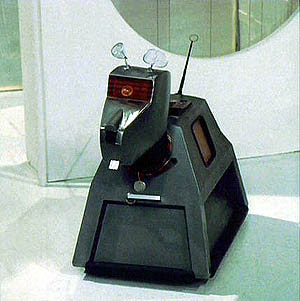 The story is so much fun with the creepy but you could almost picture it happening in the future, a festival of death.  The side characters are hilarious, like the "hippy" lizard characters who are attending the festival for the ultimate "trip": death.  Zombies.  ZOMBIES! Even a depressed computer program named ERIC who just wants to be turned off and die - a little black humorous take off of HAL 9000.

Now I want to read more Dr Who novels.  Fortunately I am getting to review the Ninth Doctor novel in a few weeks. Woohoo!  But now I'm not intimidated to go back and revisit or visit for the first time other Doctors.

Come back tomorrow and I'll be giving away either a copy of Festival of Death OR Who-ology.  Who-ology is an awesome fact book for anyone - whether you are a new or old Whovian. Oh and the giveaway will be INTERNATIONAL!!! 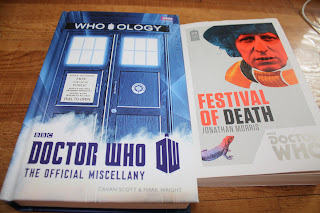