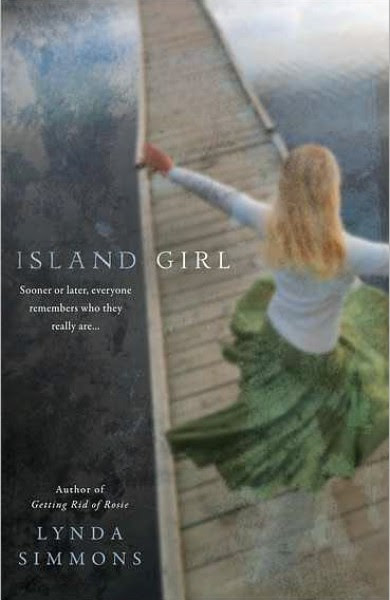 I can't remember what prompted me to join the TLC Book Tour of Island Girl.  I do know when I picked it up to read I was a bit hesitant.  I mean, I've been on a run of wonderful books and somehow a book about a woman's struggle with Alzheimer's just seemed a bit depressing.  Man, was I wrong.

I have to say that from the minute I started reading, I became so engrossed with the story of Ruby, Grace, and Liz that I was done with the book in a just a couple of days.  I gave it five stars on GoodReads and it has become my favorite read so far this year.  Yep.  That good.  I think it's because there is absolutely nothing I would change with this story.


From the back of the book:

There are people who try hard to forget their problems. All Ruby wants to do is remember...

Ruby Donaldson has been diagnosed with early onset Alzheimer's Disease, and she'll be damned if she won't straighten out her troubled family before she no longer knows how.

Ruby spent years fighting to hold on to the home her grandmother built on Ward's Island. The only way she can ensure that her younger, mentally scarred daughter Grace can live there for the rest of her life is to convince her older daughter, Liz, to sober up and come home.

Ruby always thought she'd have a lifetime to make things right, but suddenly time is running out. She has to put her broken family back together quickly while searching for a way to deal with the inevitable- and do it with all the grit, stubbornness, and unstoppable determination that makes Ruby who she is...until she's Ruby no longer.

The book is laid out with the three women alternating their points of view: the perfect way to write this story.  Each character struggles with their own problems and often doesn't make the best decisions.  Giving a voice to each of them made them so human and sympathetic.  I wanted to cry at their stories and more often than not was laughing and cheering them on as they each overcame huge obstacles.

Ruby is only fifty-five and has been diagnosed with early onset Alzheimer's.  Her condition is deteriorating VERY rapidly and she must reconcile with her estranged daughter Liz, provide a care-taker for her mentally challenged daughter Grace, and secure her family home on Ward Island.  Ruby is probably the hardest of the three to really understand.  She doesn't always make the best decisions, has a horrible track record with the men in her life, and is sometimes almost abusive towards her daughters.  Written any other way, Ruby would have been a character I didn't like, but I felt so protective of her.  I wanted her to reconcile with her daughters and find happiness in the short amount of time she had left.  I wanted her to have more time.

Grace is the youngest daughter - beautiful but slow.  It's never stated what her exact diagnoses is but Grace is mentally challenged somehow making her family very protective giving her an extremely sheltered life.  Grace has a sad period in her past and as the story unfolds the story comes out.  Her story is the part that broke my heart the most.  You can't help but love Grace.  I enjoyed watching her struggle and take steps towards her own independence.  She reminded me of an injured baby bird who is finding out how to use her wings and fly.

Liz was my favorite of the three.  Because of events that happened a few years back, Liz is estranged not only from her mother and sister, but from the island itself.  While Ruby and Grace are on the island, Liz has become a lawyer who no longer practices law and is happily sinking into an alcoholic oblivion.  Learning that her mother has Alzheimer's isn't even enough to reach Liz through her haze.  But when a close acquaintance is in need of legal help, Liz must face her past learn to forgive.  Liz was the much needed reality check to Ruby's story.  She was also the character I loved most as I watched her slowly come back up from the hole she was living in and cheered her on through each victory.

Of course there are wonderful side characters that provide wonderful depth to the story.  There's Mark who has always been the love of Ruby's life, whether she deserves him or not.  Jocelyn. Mark's twelve year old daughter, gives the second half of the book a huge boost.  She became one of my favorite characters.  She's feisty, angry, and states what's on her mind.  But somehow is a much needed presence in Ruby and Grace's life.

So this story wasn't depressing at all.  It was hopeful, beautiful, endearing, funny, and bittersweet.  It would make a fabulous book club read because I keep wanting to talk about it to someone.

Come back tomorrow for my interview with Lynda Simmons about Island Girl.  You'll also have a chance to win this book as she has graciously offered two books two giveaway!