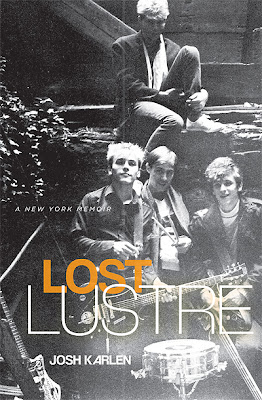 
I was asked by TLC Book Tours if I wanted to read and review Lost Lustre by Josh Karlen.  I saw that it was a memoir about New York City in the 1970's and 80's and The Lustres (whom I had not known about until this book) where a local New York band that played at venues such as CBGB.  I thought that it sounded pretty interesting and I am a big fan of some of the rock and punk bands that used to play there back in the day.

I have to say right here that this book was NOT what I expected.  I was expecting, I guess, a memoir by one of the band members sort of glorifying an unknown band.  That's not what this was.  From the first pages this was about New York City -- Josh Karlen's New York City.  From Karlen's  birth in the 60's and the people and music that influenced him to the squalid neighborhood of Alphabet City where he was thrown into in the 70's and 80's. Karlen includes photos every now and again in the book and Avenue C in NYC looks like a war zone.

From the get-go this book sucked me in.  Each chapter flows into the next but can also stand alone as a single story.  At first I found it to be a bit repetitive but the story picks up pace and starts to flow.  The Lustres and their front-man Tim Jordan do make an appearance in a large middle chapter.  Jordan was a childhood friend of Karlen's and it was fascinating and a bit heartbreaking to read of the rise and fall of their band and front-man.  I am sure there are probably a myriad of bands past and present with similar stories in New York City.  It's only after reading that chapter does the title of the book become apparent as pertaining not only to The Lustres but perhaps of New York City during that era as well as, well just maybe, our view of the past.

The rest of the short book is filled with memories of past loves and loses but what I really enjoy is the portrayal of New York City.  This isn't the New York City I lived in for a short while filled with posh nightclubs and Starbucks on every corner.  This is the New York that I'd glimpse every once in a while when walking to a restaurant in Harlem or popping into a dive bar in Alphabet City.  This New York City has personality and I loved reading Karlen's description of it all.

For more information on the band The Lustres, check out Tatra Press where you can hear snippets of their songs which I thought where actually pretty good.  I'd have definitely gone to see them live.

Check out the other reviews by heading to these blogs: