Shadow and Bone (my review) was one of my favorite books last year.  I had so much fun reading this first book of Leigh Bardugo's new trilogy.  I ranked it up there with gems like Divergent and The Hunger Games.  So no surprise when I heard that the Harry Potter producer and Dreamworks were going to make this a movie series too.  Magic, Russian-esque folk-lore, and so many awesome scenes I can't wait to see how it's depicted in a movie.  This series has already garnered so much attention I didn't think I'd be lucky to get book #2 as an ARC -- but I did!! Woohoo!  If you haven't read Shadow and Bone -- go read it now so you can catch up on the series.

Hunted across the True Sea, haunted by the lives she took on the Fold, Alina must try to make a life with Mal in an unfamiliar land. She finds starting new is not easy while keeping her identity as the Sun Summoner a secret. She can’t outrun her past or her destiny for long.

The Darkling has emerged from the Shadow Fold with a terrifying new power and a dangerous plan that will test the very boundaries of the natural world. With the help of a notorious privateer, Alina returns to the country she abandoned, determined to fight the forces gathering against Ravka. But as her power grows, Alina slips deeper into the Darkling’s game of forbidden magic, and farther away from Mal. Somehow, she will have to choose between her country, her power, and the love she always thought would guide her--or risk losing everything to the oncoming storm.

It's always hard to review past book one in a series.  I mean, unless you've read book one, you are going to be completely confused by the review AND probably read a bunch of spoilers.

That said I had fun with Siege and Storm although I do think it fell just a tad bit into the pit of second book blahs.  What I mean is that while it's jam packed with good action scenes - I'm still left waiting to see the final showdown.  The interesting thing to see in Siege and Storm is the relationship between Alina and Mal.  In book one Mal was a bit too perfect.  I loved that he made mistakes in this book, got jealous, and they both did thing that made me want to slap them.  But it was a bit more realistic than perfect Mal from book one.

Spoiler Section
For those of you who've read both books:  What do you think of Mal? Does it bother you that Mal seems the happiest when Alina doesn't have her full powers?  How creepy stalker is the Darkling in this book?  What do you think about the pirate/prince?  Swoon! Is it ok to admit that I liked him better than Mal in this one?
Spoilers Over

Reading Siege and Storm, I am too impatient to see how it all plays out to truly enjoy it.  That said, I think if the movies go through then Siege and Storm would make one awesome movie. There are a ton of action sequences that I think would look amazing on the big screen.  And how cool would the Russian-esque costumes be?

Tap tap tap....when does Ruin and Rising come out?  Sigh. 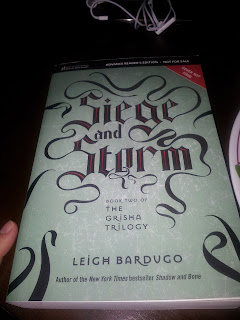 Check out her short story/Russian fable The Too-Clever Fox which is pretty darn good:

And I need to read her other one, The Witch of Duva:

Posted by Amanda at 3:13 PM No comments: Peeking Between the Pages
Devourer of Books
S Krishna's Books
Let Them Read Books
The Adventures of an Intrepid Reader
Posted by Amanda at 3:28 PM No comments: 
After reading Susanna Kearsley's book The Winter Sea (my review) last year, I knew it wouldn't be my last.  I had so much fun with her combination of past and present and her unique "sort of not really time travel" romance books.  Haha. Wonder what category they fall into?  When I saw Sourcebooks had a little contest on their Facebook page I entered to win her newest one re-published by Sourcebooks.  It was already published in the UK by Allison & Busby but Sourcebooks publishes her US books. I just love the covers they do...gorgeous!  The Firebird does not disappoint. In fact, while I liked Ms Kearsley's books before, I am now a solid fan.  I'm tacking her up in my list of go-to feel-good get you out of your reading slump authors.

Nicola Marter was born with a gift so rare and dangerous, she keeps it buried deep. But when she encounters a desperate woman trying to sell a modest wooden carving she claims belonged to Russia's Empress Catherine, Nicola knows the truth.

There is one with greater powers than Nicola's, but he's a man she can neither love nor lose. Together, they'll pursue answers' and perhaps untold rewards. In once-glittering St. Pettersburg, the tale of The Firebird unfolds, irrevocably changing all who've pursued its secrets.

It was just coincidence that the only other Kearsley book I've read is The Winter Sea - which if you look on Goodreads is touted as Slains Book #1 and The Firebird as Slains Book #2.  Don't think that you have to read The Winter Sea first or anything.  Mainly it's fun for Kearsley fans to see repeat characters and locations.  And I think that Rob is a repeat character from her novel The Shadowy Horses but I haven't read that one yet.

What originally drew me to this story is the Russian connection.  I had known from some college courses the significance of the firebird in Russian lore so I was excited to see how a Slains Castle in Scotland, the Jacobite Revolution, and Russia had in common.  The story was just a smidgen slow but once the characters entered Russia then the story really took off.  While I enjoyed Nicola Marter and Rob's story of their search for the history of a small wood carving of a firebird, it was Anna's story that made me hunker down and devour the book.  How this Scottish girl flees during the Jacobite Revolution and ends up in Russia is fascinating.  Ms Kearsley's description of St Petersberg - one of my top five places to visit - is so vivid.

A few weeks ago I had the privilege of catching a chat night with Susanna Kearsley on Sourcebook's Facebook page.  She is so down to earth and awesome.  I believe they still have the transcripts up.  I loved hearing how she developed her characters, how she researched (a lot of her characters are actually historical figures!), and her take on genetic memory.

While beautiful, I don't think this cover really depicts the time period or subject matter of the book: