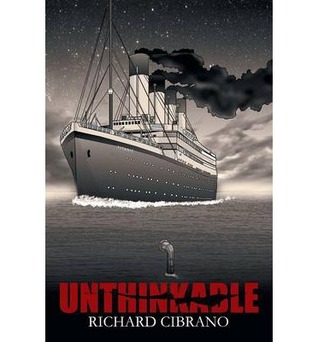 
When I heard of Richard Cibrano's novel about the Titanic I knew I'd have to check it out. I've always been fascinated by the Titanic. I remember when the National Geographic came out in the 80's when they discovered the ship underwater. I couldn't even read but I remember flipping through the pages.  Then when I found out this novel contained the Pinkerton Detective Agency, Teddy Roosevelt and a conspiracy...come on!  Sign me up.  I had so much fun with this novel. I hope Mr Cibrano decides to write more novels staring Pinkerton agent Dimaio.  In fact, this would make an awesome series for BBC or PBS.

When detective Francis Dimaio, supervisor of the Pinkerton detective agency's Philadelphia bureau, read the telegram from Allan Pinkerton, ordering him to leave immediately for New York, he knew he would have to put off the vacation with his wife. What he couldn't have known was that he was about to open an investigation into the deaths of more than 1500 people.

A few days earlier, former president Theodore Roosevelt had arrived unexpectedly at Pinkerton's Broadway office. In his possession was a letter from his former aide and adviser, Major Archibald Butt. Butt, now the aide-de-camp for President Taft, had been returning to the United States on the Titanic after a round of diplomacy with the King of Italy, when he went down with the ship. In the letter, dated the day of the sailing, Butt wrote that a representative of the Italian Prime Minister approached him with knowledge of a stratagem to incite the world to the brink of war. Most alarming, the plot would involve the sinking of a passenger liner. The source of the tip further confided Titanic would be the logical target. Determined to uncover the facts behind the portentous warning, Roosevelt persuades Pinkerton to take on the case. Dimaio, a tenacious investigator whose resume includes tracking Butch Cassidy and the Sundance Kid, accepts the assignment and quickly uncovers an elaborate insurance fraud involving Titanic and her sister ship Olympic. Working every angle, Dimaio discovers the fraud was double-edged, and as evidence begins to emerge that the plot is still in play, he and Pinkerton find themselves in a race against time with an ambitious financier, a ruthless agent from British Intelligence, and the cabal of powerful men working behind the scenes, hell-bent on seeing to completion their diabolical plans.

I have to get this off my shoulder first. I'm not a fan of present tense narrative. For some reason it always takes my brain a bit to adjust to the different narrative. That said, by the end of the book I barely noticed it I was having so much fun with the story.

Richard Cibrano did an amazing job weaving in historical facts and fictional what ifs.  What if Titanic was switched with the badly damaged Olympic as an attempt at massive insurance fraud.  What if people knew something was going to happen to the Titanic that voyage? I also adore books that have Teddy Roosevelt. He is such a fascinating character, such a larger than life figure. I'm also intrigued by the historic Pinkerton detective agency. I need to read more fiction and non-fiction books about them.

I ended up really loving the character of Dimaio. A historical figure himself, I adored his fictional persona Cibrano made up and his intriguing real life accomplishments. Seriously, some one HAS to make a series or movie on this guy. He went under cover in the mafia and chased Butch Cassidy and the Sundance Kid in South America. I wish there was more info out there on this guy. I also loved that Cibrano included the character of Rigel, the hero dog of the Titanic. Even if the story of Rigel was made up, I love the fictional Rigel of Cibrano's story.

I'm hoping Richard Cibrano writes more stories of Dimaio.  I'd love to read one about the Butch Cassidy and Sundance Kid.
Posted by Amanda at 10:44 AM No comments: