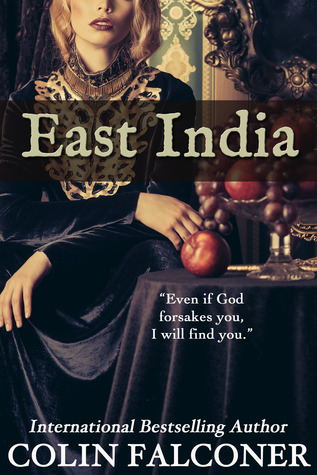 
When I heard that HF Virtual Book Tours was doing Colin Falconer's latest novel, I knew I had to jump on board. I read his novel on Cleopatra called When We Were Gods back in 2008 and became a Colin Falconer fan. Oddly enough I haven't read more of his books but I am going to have to. I didn't know he had so many books under his belt. I loved how he wrote Cleopatra as an amazing political figure. He has other famous women books such as Anastasia and Isabella of France. He even has a Jerusalem series I'm going to have to check out.

In any other circumstance but shipwreck, rape and murder, a man like Michiel van Texel would never have met a fine lady such as Cornelia Noorstrandt.

He was just a soldier, a sergeant in the Dutch East India company's army, on his way from Amsterdam to the Indies to fight the Mataram. Such a woman was far above the likes of him.

But both their destinies intertwine far away from Holland, on some god-forsaken islands near the Great Southland. When their great ship, the Utrecht, founders far from home, surviving the Houtman Rocks is the least of their worries.

As they battle to survive and the bravest and the best reveal themselves for what they are, Cornelia's only hope is a mercenary in a torn coat who shows her that a man is more than just manners and money.

He makes her one promise: 'Even if God forsakes you, I will find you.'

But can he keep it?

I have to be honest, I am only half way done with the novel. I received the book in the mail and then immediately went to visit family toting my one year old along. I thought I'd have had more time to read but alas.  That said...this book is addicting! The more I read the more I am getting sucked into the story.

The story starts off as the boat is boarding and leaving Holland. It's a tad slow build up but necessary as we see all the cast of characters come together for, I'm not joking, an expected eight (EIGHT!) month long voyage. Can you imagine?! What would happen if you threw over 300 men, women and children - sailors, soldiers, a pastor and his family, and a wealthy woman into a not too large boat for eight months. Grudges, jealousy, rape, murder, and shipwreck - and it is all historically based.

I was Googling the time period, the Dutch East India company and the Houtman Rocks of Australia when I came upon the story of the ship Batavia. This shockingly horrific event is what Colin Falconer based the book on. The story of the Batavia, as well as Colin Falconer's fictional Utrecht is literally like watching a shipwreck - fascinating, horrible, and hard to look away.

I really enjoy the historical aspect of historical fiction but I am looking forward to seeing how Cornelia and Michiel's story progresses.  Literally at 150 pages into the novel they are just shipwrecked and starting to interact on the island.  So far I am loving the various character's voices.  Colin Falconer tells the story not only in Cornelia and Michiel's points of views, but also alternates between the villainous skipper, the mutinous Undermerchant, and the mutable commandeur of the Utrecht. So far I only have two critiques: I'd love a character list and description at the beginning of the book. I sometimes get a bit confused when sailors are mentioned and what jobs they do. The other is that while I think the cover is gorgeous, Cornelia is supposed to be darker olive skinned with dark hair. Hmm.

The back of the book mentions a critic liking Cornelia and Michiel to Jack and Rose of the Titanic movie.  It is illuminating to know that from the start the reader knows that all will not end well - think of Romeo and Juliet's story or even Cleopatra. While I am prepared for non-happily ever after, I can't wait to see how this story ends. (I will update this review when I am done. Check back!)

Check out the rest of the HF Virtual Tour stops for more reviews.


Trailer for the East India:

Posted by Amanda at 2:00 AM No comments: