It's sunny and beautiful here in Las Vegas today. Grabbing a cup of white mocha and reading a book before I go to the grocery store. What are you reading right now?

- Posted using BlogPress from my iPhone

Posted by Amanda at 1:15 PM No comments:

A short while back I was talking to my brother on the phone.  I don't get to see my brother or sister too often since they both live in Alaska.  But once in a blue moon I can catch my brother on the phone.  My brother works too jobs: at a beer distribution company and part-time for a bookstore (the same one I work at).  My brother enjoys reading just as much as I do so the bookstore job is more of a fun job for him.  Anyway, he told me that he had heard that one of his beer distribution co-workers was making fun of him (and not in a fun kind of way) behind his back for, and get this, "hanging out at bookstores."  Hmmm.  Really?

So I want to ask you all, have you ever been made fun of, lighthearted or not, for reading or liking books?  My husband teases me but only because I have three bookshelves of unread books.

All I could think of was that this guy was probably never read to as a child.  Which reminded me of this photo: This is my brother reading to me.  Obviously we think books and bookstores are cool.
Posted by Amanda at 12:13 PM No comments:

I have been horrible lately about taking pictures.  One thing I have noticed with this whole pregnancy thing is how tired I am!  I've even been reading slower because I'll fall asleep while reading.  So I'm just going to bombard you all with some random photos.  I'm also excited because I set up a Flickr account so I can get all organized.  Woohoo! (Note: Took me a bazillion years to figure out how to put the URL.  If you have problems on your blog, let me know. I finally figured it out.)

A short while ago I took some photos of my to-read bookshelves.  Yeah, I have a lot to read.  I enjoyed Caribousmom's post today on the same subject. And more books to read: I took just a few photos during the holiday's.  I found a great Santa hat at the dollar store - it's sole purpose: to humiliate the dogs.  Here's my Charlie: Poor Anna hated the thing. I could only get one relatively non-fuzzy photo out of her: We also pet-sitted (pet-sat?) our friends two dogs.  I got one out of Tinka.  She is so wiggly: I failed miserably with Koa.  But I did catch him later: It's hard to believe that I once knew Koa as a puppy.  This is Koa and me a few years ago on the day our friends got him:

During Christmas we cooked a nice home-made meal for ourselves.  Here's my husband cooking some heart shaped biscuits. And here's our tiny tree with presents.  I think next year (or the one after that) since we have a nice big home now, we'll be getting a slightly larger tree.  I hope. One of the things I love about Las Vegas is the weather.  Because sometimes during the winter we get days like this: Sigh.  But randomly this winter we had some snow.  I posted that one here.  We also had tons of weird foggy clouds and about four days straight of rain.  So bizarre: Now let's talk about the main reason why I've been so tired and behind on reading, blogging, and well everything.  In about four more months I'll be to meet my little man in person.  Yep! I'm having a baby boy!  Phew.  I honestly had no clue what I was going to do if I had a girl.  I can do a simple braid and that's about it.  And pink is one of my least favorite colors.

The whole pregnancy thing is going well so far.  No sickness.  I've been TIRED.  And I developed hyperthyroidism so they'll be monitoring me and baby's weight gain to make sure we are gaining enough.  So far no problems, but the cool thing is the ultrasounds.  I get to take a snapshot of baby like this:

Yeah, he's totally got his love of getting his photo taken from his dad.

The weird thing about the 3D is that it doesn't do round object very well so the pictures are a little distorted.  But I loved seeing the images.  I think my little man's going to have some big lungs on him:

I have a feeling he's going to love singing karaoke as much as his dad :)

My friend and I are currently planning a baby shower in March but I've also received some cool things from friends.

Baby boy had better love reading as much as his mama because her awesome friend sent a ton of books: One of my husband's co-workers brought this over the day I found out it was a boy.  I have to say I love monkeys. For Christmas, my amazing husband gave me a "baby bag" consisting of an REI backpack with some baby items.  He said it was so I could just throw some stuff in, sling it on and go.  I thought it was such a sweet and thoughtful gift.  Also imagining him in the store, picking out baby items just makes me smile so I thought it was a wonderful gift.  My sister in Alaska also sent a cute little outfit that says Alaska Love.  Awww. Another friend got back from Hong Kong and gave me the coolest bag and a baby carrier.  I can't wait to try it out!  (Probably much trial and error as I can't read Chinese :)

And that's about it.  The only other thing lately was watching the Auburn Tigers win the BCS Championship.  We were so excited and so bummed to not be there live.  Tickets were ridiculously expensive.  I think my husband was really nervous too.  Usually we'd have a big BBQ but instead it was just a calm evening with two of his buddies at our house and some pizza.  So no pictures.  Instead I'll post this oldey but a goody: Posted by Amanda at 6:06 PM No comments:

Today as I was sitting down for lunch, I opened my brand new book. Doesn't it have a beautiful cover?

Guess what I found inside?

Yippee!! I was so excited! What a cool surprise.

What are you currently reading?

-Posted using BlogPress from my iPhone

Posted by Amanda at 6:16 PM No comments:

Thanks to a wonderful reader, Amy, I just found out that my comments disappeared.  A while ago I installed Intense Debate to manage my comments but found this is the second time my comments have all disappeared.  Hopefully I have it fixed now so please comment away!  Thanks again to Amy who let me know about this problem!


And for fun, here's a photo of me in Alaska holding a fish.  I didn't catch it but had fun pretending I did:

Virgin and the Crab - Robert Parry 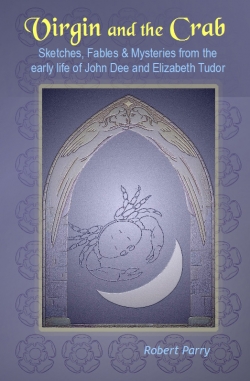 
A while back Robert Parry asked if I wanted to read and review his book Virgin and the Crab.  I remembered reading a favorable review a while back on a book blog so I agreed.  I was a little nervous because, well what if I didn't like it?  And at a hefty 480 pages, if I didn't like it I wasn't likely to get far into it.  Also, the title made me wonder was it fictional, a series of short stories, or what?  Well I shouldn't have worried so much because from the first few pages I fell in love with the book and am giving a raving five stars on GoodReads.

The book starts out with a List of Players which, thank you Robert Parry, I definitely used.  I love history but am not a huge Tudor fan as some others out there.  So when they refer to, say, the Earl of Devonshire, I know exactly who they are talking about.  The time span follows Elizabeth as a small child, through the death of her half brother Edward VI, King of England, to the fateful reign of Jane Grey, to the succession of Queen Mary and through her death to Elizabeth's ascension.

This book is so originally written.  I mean, it reads like a play.  Not like Shakespeare or anything but it's written in present tense, which as odd as that sounds totally works.  There are main chapters but a lot of the chapters have Acts and Interludes which I really enjoyed.

Basically what this all means is that I remember this book like I've seen it played out before me.  For instance, when John Dee first meets Elizabeth when they are just children.  Elizabeth is crying over the recent death of Katherine Howard by her father, Henry VIII.  That scene is just awesome.  Then later after they are much older there is a scene I love.  John Dee had taught Elizabeth how to send secret messages through groupings of flowers.  So when Queen Mary is on the throne and Elizabeth is pretty much under house arrest, Dee sneaks into to see Elizabeth disguised as one of the many gardeners.  There they pass flowers back and forth wordlessly and you know they are sending each other messages.  I just loved scenes like this in this book.

It also does an amazing job of telling the whole story by not just following John Dee or Elizabeth but by following most of the characters.  I found this gave me such a well-rounded view of all the tension and politics going on at the time.  It's absolutely amazing that history turned out the way it did.  It's shocking all the events these characters went through and survived how they did.

Towards the end of the book, Robert Dudley says something that I just chuckled at because it so fit this book.

"And yet I do wonder how it has all come to pass just as you and Cecil said it would," Robert observes, "like the unfolding of some great drama or history play! It is astonishing!"

I absolutely adored this book and can't wait to read another book by Robert Parry.  My only disappointment with this book is that with so many other books on this subject, this gem might get overlooked.

Speaking of which, his new book The Arrow Chest is now out.  Head over to Luxury Reading to check out this new book (and possibly win a copy).  Here's Robert Parry's description:

My novel begins in 1876, the year in which the remains of Anne Boleyn came to light during a renovation of the Chapel of St Peters ad Vincula in the Tower of London. It is a Tudor story – only moved forward a few centuries in time.

The Virgin and the Crab
Also Reviewed by:

Well I know I've been MIA lately and I do apologize.  It is my goal to be much much better this new year.  Last year was very very crazy with a move from New York to Kentucky, a trip to Texas for a month, a move from Kentucky to Las Vegas, buying a new home, and finding out we are expecting a little one in late May.  Phew!  Things are starting to settle down and my brain is starting to free up.  I thought I'd post a photo of our backyard this morning.  You never know what to expect in Las Vegas. 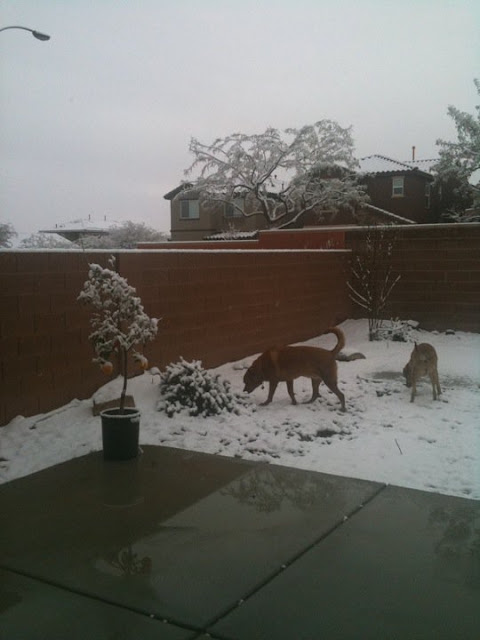 Posted by Amanda at 2:11 PM No comments: